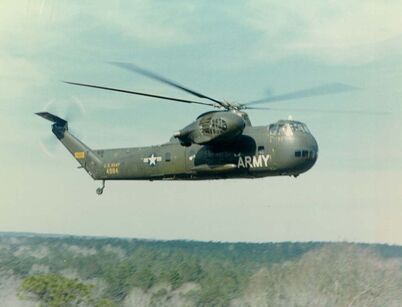 The Sikorsky CH-37 Mojave was a heavy-lift and transport helicopter manufactured by Sikorsky Aircraft.

The Mojave (also known by the company designation S-56) was first developed as a troop transport aircraft for the United States Marine Corps. Design work began in 1951 and the first prototype, known as the XHR2S-1, first flew 18th December 1953. It entered service in July 1956 with the Marine Corps, and shortly after, with the Army, who ordered 94 examples as the H-37A, which were initially assigned to the 4th Medium Helicopter Transportation Company in February 1958.[N 1]

Four of these aircraft were used successfully in Vietnam for the purpose of recovering downed aircraft. At the time, the CH-37 was the largest American helicopter ever made, which allowed it to carry extremely large or heavy loads and assisted in this role. The Mojave also saw experimental use as a sky crane and AWACS aircraft. However, the aircraft had a relatively short service life, being retired by the late sixties due to its large and underpowered piston engines. The S-56 was replaced by the CH-47 Chinook by Boeing. A total of 154 were built, with only five surviving to the present day.