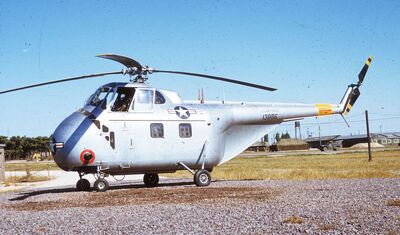 The Sikorsky H-19 Chickasaw was an American utility helicopter made by Sikorsky Aircraft. It was used by all branches of the United States Armed Forces and licensed-built by several foreign countries as well. A total of 1,550 were built.

The H-19 was designed as a replacement for the aging H-5 Dragonfly. It first flew on November 10th, 1949, and entered service in 1950. The Chickasaw was used during the Korean War as a transport and rescue helicopter to great success, and even used at the beginning of the Vietnam War before being replaced by the H-34 Choctaw. The French attempted to turn the H-19 into a gunship, but found its engine to be too underpowered to carry the weight of the weapons.