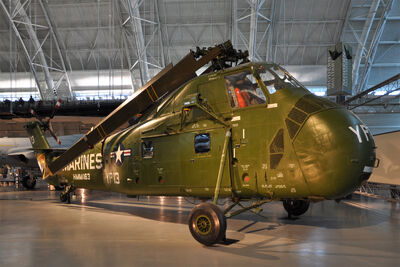 The Sikorsky H-34 Choctaw was an American utility helicopter produced by Sikorsky Aviation. It was designed as an improvement on the company's previous H-19 Chickasaw and was primarily used by the United States Navy in the anti-submarine role. Over 2,000 were produced and some are still in use today.

The H-34 (originally known by the company designation S-58) first flew on March 8th, 1954 and entered production later that year as the HSS-1 Seabat in anti-submarine configuration and HUS-1 Seahorse in transport configuration while in service with the US Navy, Marine Corps, and Coast Guard. It was also used by the US Army and Air Force as the H-34. The British company Westland produced a licensed copy of the aircraft named the Wessex.

The Choctaw wasn't used in the Vietnam War by the US Army, who deployed CH-21 Shawnees instead of them. However, it did see service with the Marine Corps and Navy, as well as with South Vietnam. The aircraft was finally retired from US service in 1973.