Aircraft Wiki
Register
Don't have an account?
Sign In
Advertisement
in: Airlines, Airlines of the United States

Spirit Airlines, Inc. is an American ultra-low-cost carrier headquartered in Miramar, Florida in the Miami metropolitan area. It is the seventh-largest commercial airline in the United States. Spirit operates scheduled flights throughout the United States and in the Caribbean and Latin America. The airline operates bases in Atlantic City, Baltimore, Chicago–O'Hare, Dallas/Fort Worth, Detroit, Fort Lauderdale, Las Vegas, and Orlando.

Spirit Airlines, Inc. is a Delaware corporation[45] that is publicly traded on the New York Stock Exchange

As of March 2020, the Spirit Airlines fleet consists entirely of Airbus A320ceo and A320neo family aircraft.

Spirit Airlines has been the subject of complaints and punitive actions by the United States Department of Transportation (DOT). Most of the claims against the company were for allegations of deceptive advertising practices, customer service, and the airline's policies for charging additional fees at the time of purchase: 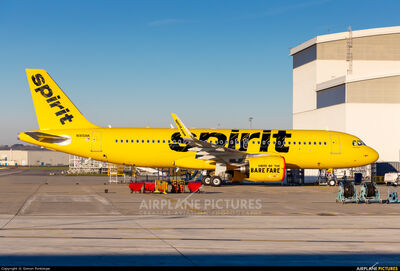