The Sukhoi PAK-FA (Su-57) is a twin engine stealth multirole fighter being developed by Sukhoi OKB and HAL under a joint venture. The current prototype is T-50. The Aircraft will have 3D TVC, super manveuverability, stealth features, internal bays, and it was built to counter American 5th generation fighters such as the F-22 Raptor or F-35 Lightning II .

The Sukhoi PAK-FA was developed to replace the Sukhoi Su-27 Flanker and MiG-29 Fulcrum 4th Gen Fighters of the Russian Air Force.

It is expected that the PAK-FA will be equipped a with a 1500 T/R module AESA radar with two side-looking AESAs, with 358 T/R modules. The main radar is based on the Irbis-E PESA of the Su-35 and is specified N036 Byelka. Additionally, it will have two L-band (Very High Frequency VHF) radars on the wing tip sections and a small second X-band on its tail, providing 360 degree radar coverage. It will also feature an advanced IRST (Infrared search and Track) sensor.

Several aspects indicate the strength of the T-50 aerodynamics:

When looking on the video of the PAK-FA´s first flight it can be seen that the PAK-FA absolved takeoff without using its horizontal stabilizators, meaning that it gained altitude only by the high amount of lift generated by the airframe. In fact, other than the PAK-FA, only very few fighers like the F-22 Raptor are able to take-off only by accelerating and without pitching up.

The PAK-FA is also the first Russian aircraft with real stealth capabilities. The key features of the PAK-FAs Stealth features are the faceted design on the intakes and paralleled edges to scatter radar waves rather than reflecting them. However it falls short in stealth between its American counterparts, especially at the sides and rear fuselage, with one big problem being its engine blades, which are not hidden. According to Sukhoi, its frontal cross section is about 0.1-1 m².#

With India playing a big part in the financing of the PAK FA program, some concerns have been expressed over the program's recent progress. For example, its stealth capabilities and engines have been described to be "far from adequate". But despite of these problems, cancellation is rather unlikely, as Russia is India's main partner regarding military equipment.[1]

The first prototype taking off in 2010 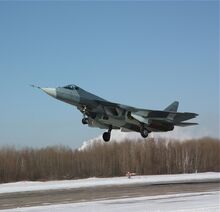 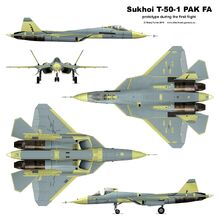 Retrieved from "https://aircraft.fandom.com/wiki/Sukhoi_PAK-FA?oldid=18079"
Community content is available under CC-BY-SA unless otherwise noted.