The TR-3A Black Manta is a reputed black project of the United States government. It is supposed to be a stealthy tactical reconnaissance and laser-target-designation aircraft for the USAF. It is speculated to be a development of the Lockheed F-117 Nighthawk and Lockheed Have Blue, being all-black triangular in shape with angular facets, flying in formation with the F-117A during the first Gulf War, designating targets for the laser-guided bombs of the stealth fighter. It has appeared in AW&ST and Popular Mechanics. 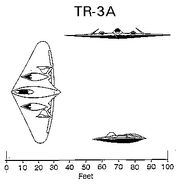 Add a photo to this gallery
Retrieved from "https://aircraft.fandom.com/wiki/TR-3A_Black_Manta?oldid=17623"
Community content is available under CC-BY-SA unless otherwise noted.