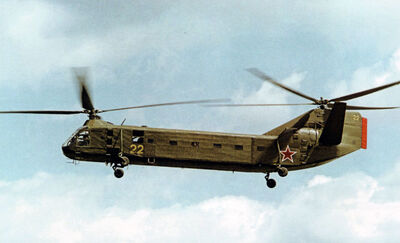 The Yakovlev Yak-24 (NATO reporting name: "Horse"; Russian: Яковлев Як-24) was a tandem-rotor transport helicopter made by Yakovlev during the 1950s and used by the Soviet Union, where it was commonly nicknamed "Flying wagon" (Летающий вагон).

Development of the Yak=24 began in the autum of 1951, when Joseph Stalin summoned Mikhail Mil and Alaeksandr Yakovlev to the Kremlin and ordered them to design a large transport helicopter to compete with American helicopter developments. Mil used his greater experience to develop the rotors, while Yakovlev produced the fuselage, consisting of steel tubing with fabric coverings. The first prototype flew on July 3rd, 1952. Four prototypes were made - two for flight testing, one for static tests and one for ground resonance, which broke up on the ground, resulting in clearance for production being delayed by 30 months.[1] Despite not being very successful, production began in 1955. The exact amount of Yak-24s built is unknown, but is estimated to be between 40 and 100. The aircraft was retired not long after it entered service, due to technical problems and the development of the more successful Mil Mi-6.